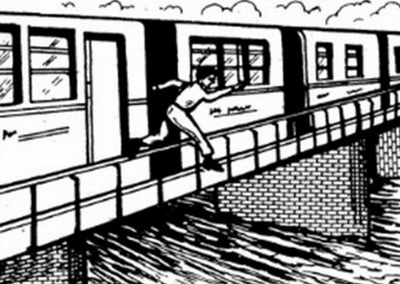 Au is an active dynamic and young engineer in the State Irrigation Department. He greatly enjoys his field survey work and outdoor life. During one of his tours to a hilly region, he came across a river. He observed that a dam could be built across that dam would not only help to irrigate millions of acres of dry land but also provide a vast amount of power supply to the state. Now all surveying the river and the surrounding area from a bridge. Finally, he presented a foolproof plan for Iota’s new dam. His initiative was appreciated b the higher authorities and lie was made the engineer in charge of the project. All this was able to build a great dam and bring prosperity to his motherland.

This story depicts a Keen enthusiastic and well-motivated attitude of the author. He projects himself as an intelligent, hard-working, and enterprising individual. He is able to think, plan, and act independently. He displays commendable initiative and powers to be very resourceful. He has a positive outlook and he views the future with optimism. He is confident of his success and takes on new responsibilities done with the help and assignments cheerfully and voluntarily. He has the ability to get things and cooperation of other people. This candidate will respond well to training and believe in an effective leader. Selected

Qamar was a hard-working and well-behaved engineering graduate. His parents were poor and Qamar obtained his engineering degree with the help of Government scholarship. He could secure only a second class in his final degree examination. When he tried to secure a job he could not get any. He was willing to accept any type of work but he was unsuccessful wherever he went. He had no money to study further or start a business of his own. Utterly disappointed and frustrated in his efforts to find a job, Qamar decided to commit suicide. In the picture we see him standing on a river bridge. Then he jumped over the bridge and plunged into the water. Just then an industrialist of the town was rowing a boat on the river. He rescued Qamar from drowning. When the industrialist heard about Qamar’s plight, he offered the young engineer a job in his factory. Qamar thanked the industrialist and always remained grateful to him.

This story reflects a weak character who cannot stand on his own legs. The candidate cannot face life with courage and determination. He does not have pluck and initiative. He cannot face setbacks and dfficul1ies with fortitude and determination. The fighting spirit is sadly lacking in him. He is an utter dependent and might be suitable for routine jobs in the role of a subordinate. He cannot function as an effective leader. Not selected

Sohail was a college student. He was very much interested in games and spent most of his time in the playfields. In spite of his father’s advice, he did not concentrate on his studies. Finally, the examination results came. Sohail found that he had miserably failed in his degree examination. He was afraid to go home. He knew his father would be furious and his mother and sister would cry. He felt humiliated and unhappy. He did not know what to do and where to go. He went on walking aimlessly and now we see him standing on the bridge. He did not want to live with shame. He decided to jump into the river and end his life. But when he looked down at the water below he got frightened. In the meantime, his father who came there in search of him took Sohail home. Sohail promised his father that he would study well in the future.

The writer of this story displays a pessimistic and defeatist mental attitude. He is not confident of his ultimate success. He proves to be indecisive and feeble. He appears to be mentally dull and lacking in self-confidence; He prefers to shirk his responsibility instead of facing the issues boldly and squarely. His thinking is confused and he does not have definite goals or objectives. This candidate cannot function as a leader as he lacks the necessary will power, courage and determination to stand firm in the face of difficulties. Devoid of optimism, he cannot inspire and lead others. Rejected

Ahmad is a young, intelligent engineer, determined to achieve distinction in life. Although he passed in first class he could not secure a suitable job due to the gut of engineers in the market. Standing on a river bridge, he is now immersed in deep thought as to what he should do further. Just then he observed a boat on the river. Suddenly he realized that he could operate a fleet of motorboats in that river. It would increase the trade and economic activity of the region by leaps and bounds. He considered this project from various angles and prepared a detailed plan. He approached and convinced a leading industrialist and financier of the soundness of his Scheme. Soon, he launched the project and worked with enthusiasm, keenness, and dynamism. His enterprise proved to be a great boon to the community and brought prosperity to the entire region. In due course, he founded a big steam navigation company and became a famous shipping magnate.

The story reflects a constructive and positive approach on the part of the candidate. He is intelligent and imaginative, has the urge and motivation to succeed in life. He also displays the necessary resources to attain his objectives. He is not balked by initial setbacks but faces a problem with confidence and courage.
He succeeds in findings a workable solution to the problem which blocks his progress. He is sure and steady in his advance. He is able to resent his view logically and convincingly. The candidate will be able to lead others in a competent and successful manner. This gifted, active and dynamic candidate is especially recommended and Selected

The positive attitude brings success in life. With optimism in heart an individual can have noble visions and worthy objectives. He can paddle his own canoe where he wants it to go instead of allowing it to drift according to the tide. To develop the positive habit, here are some suggested steps: