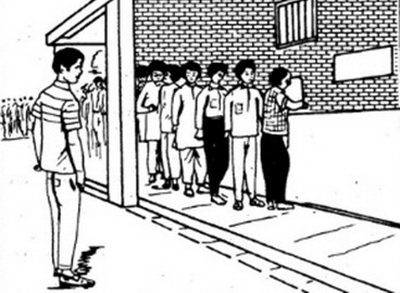 Imagination is the mainspring of our actions. It gives rise spontaneously to expressive thoughts. If we can give positive shape and direction to our imagination the results will be positive and successful. The direct our imagination in the optimistic channel we need faith, self-confidence, and enthusiasm Even in the face of setbacks and difficulties one can bring his imagination to play on a successful note. When we thinking positively, constructively and hopefully we are using our imagination in a constructive manner. When we picture successes, achievements, and accomplishments, our imagination and thoughts flow in a positive stream and enable us to realize those things in actual practice. On the other hand, we will use our imagination negatively when we contemplate a defeat and worry ourselves instead of attempting to solve the problem with patience, determination, and courage. According to Dr. Maxwell Maltz, ‘the human being always acts and feels and performs with what he imagines to be true about himself and his environment.” The Great Albert Einstein once observed that imagination is even more important than knowledge. It is this image that has made the poets, artists, engineers, authors, statesmen, and soldiers to work miracles in spite of physical and other innumerable environmental handicaps.

It is essential for a leader therefore to develop a habit of thinking and acting in a positive and constructive manner. He should not be cowed-down by obstacles and difficulties. He should not regard anything as impossible. A leader must face realities with courage and determination. He should strike out boldly and start tackling the job with complete confidence and positive outcome. He will soon find that the apparent difficulties melt away just like morning dew when they get exposed to the rays of sunlight. As we have seen in the past, the projective technique affords the best opportunity to assess our thinking habit 4 subjects were asked to write a story on the picture which is produced below. Their stories and the expert comments on the same are reproduced for careful study and analysis of the thinking habit of the subjects. Before you proceed to read the stories you can write a story yourself after observing the picture for half a minute. You must complete the story within 5 minutes. Thereafter you read the stories as well as the comments. Now judge your own story in relation to the rest. You will know whether you are thinking of the positive lines or not. In case you find that your imagination is not flowing in a positive stream you should make deliberate efforts to become optimistic.

Javed is a college student. One day he accompanied his friend Shaid and went to the employment exchange. Shahid could not continue his studies due to his family circumstances. Since he had no experience of the employment exchange activities before he asked Javed to accompany him. At, the employment exchange Javed saw the queue. Thousands of people were patiently waiting in the queue to find some job. Javed then and there determined that he should create vast scope for employment when he grows up. He wanted to help all the unemployed people. He realized that it would take a considerable time for his friend to get a job in the’ prevailing unemployment situation. With this single goal in mind, i.e. creating vast employment opportunities. Javed studied hard and eventually qualified himself as a first-class engineer. Then he started an automobile workshop. Soon it became a success and he expanded it into a huge industrial concern that manufactured automobiles, scooters, and many other industrial goods. He was thus able to offer employment to several lakhs of people.

The hero of this story is warmhearted and reveals a helpful and sympathetic attitude. He has been depicted as a purposive and determined individual. He proves to be a hardworking and very resourceful lie is able to think positively and constructively. His imagination is backed up by, sustained effort and hard work. He sticks to his goal resolutely and ultimately succeeds in accomplishing his aim. Thus the author presents a good story attributing optimistic and leadership motives to his hero. In fact, the story has a sound plot, proper sequence, and a systematic approach. The individual displays ability to lead and co-ordinate the members of a group. He will respond to training and emerge as a successful personality. Recommended.

Nazia was studying in high school. 1-us father suddenly lost his job because of a violent quarrel he had with his boss. Nazia “s father went to the employment exchange and registered himself there. However, he could not get any job readily. Since he was reluctant t go there and enquire every day himself, he asked Nazia to go to the employment exchange and find out whether any jobs had turned up for him. In the picture, we see Nazia at the employment exchange. There was a long queue. He did not have the patience to wait in the queue and make inquiries. He went back home and told his father that there was no job. But actually, on that day there was a job available. The opportunity to get a job was lost since Nazia did not have the patience and the determination to do his job in a sincere and loyal manner. When Nazia grew up his easy-going tendency also grew up with him with the result that he was not able to stick on to any single job. He liked easy jobs and finally ended up as a poor unsuccessful individual.

In this story, we find the negative image of the author at play. A defeatist attitude is running throughout the story. First, we find the father losing his job because of a violent quarrel he had with his boss Next we find the rather too lazy to go and enquire at the employment exchange himself We find the son also to be equally irresponsible and careless. The ending of the story has also a negative trend. The author is averse to hard work, sincere efforts, and determined approach. This candidate is of an easy-going type and will not be able to make the grade. Rejected.

Hafeez belonged to a well-to-do family and he was the only son of his parents. He demanded a motor-cycle from his father, but his mother thought that it was rather risky to give him a motorcycle since he was too young and temperamental. He was reckless and was likely to meet with an accident and injure himself and also possibly others. His father, therefore, told him to wait for a couple of years more till he grew up. This made Hafeeaz angry and therefore he ran away from the house. We now find him standing at the employment exchange contemplating what he should do. He did not know what job he could get. He hesitated a long time before he finally picked up courage and faced the officer at the employment exchange. But, he could get only the job of casual labor with a road-building contractor. He found the job to be very difficult and gave it up. At the same time, he was too proud to return home. When he could not find any better job he got dejected and finally ended his life by falling before a running train. He thought he could teach lesson to his parents in this manner.

This story indicates an embittered and disappointed personality. We find a lack of harmony among the characters of the story. The hero has been depicted as a spoilt child who an accustomed to too much indulgence. He is extremely obstinate and proves to be rash in his approach. He is not able to think constructively and positively. He is unable to understand the viewpoints of others.In the face of defeat, he is not able to stand firm and fight on till the end. He gives up too easily. The author thus displays an anti-social and defeatist attitude.

Jamal was compelled to see employment since his father who was in the army was Myprodm in the military encounter with the Indian soldiers. Jamal is a courageous and determined person. He has a smart appearance and attractive personality. When he went to the employment exchange he saw a large crowd queued up there. He, therefore, decide to join the Army instead. In the army, he distinguished himself well by displaying indomitable courage in the face of danger. During his spare time, he also read and educated himself as a graduate. Soon when there was an opportunity for commissioning, by his hard work and imaginative performance, he rose to be a very senior officer. Finally, in a subsequent battle with Indian soldiers, he was able to avenge the killing of his father by the enemies. He led his troops to a glorious victory in the war. He thus became a hero of the entire country.

This story brings out the dynamic and courageous attitude of the author. The hero of the story is able to think independently and act with the enterprise. When he finds that chances of his employment through the employment exchange are almost blocked, he takes definite risks and joins the Army. There he works with determination and courage and qualifies himself for greater responsibilities. When the opportunities are presented to him he seizes them with pluck and swiftness. He is able to adjust himself readily to changing situations. He has definite goals. And he makes determined efforts in a methodical and planned manner to realize them. We get the impression that the hero is warm. Accommodative, and sociable individual and has the ability to face problems with courage and solve them in an imaginative and constructive manner. The whole story sparkles with optimism A success-oriented candidate who is strongly recommended.